The central element of a PEM fuel cell is the CCM (Catalyst Coated Membrane). Together with the sub-gasket foil and possibly the gas diffusion layers (GDL), it is also known as a membrane electrode assembly (MEA).

This actual functional carrier of the fuel cell (proton exchange membrane, PEM) is fixed in the stack of bipolar plates, sealing elements and the gas diffusion layer (GDL) by means of a thin supporting foil.

Tasks of the sub-gasket foil:

CMC Klebetechnik offers as a standard for EME/MEA assembly in PEM cells a Teonex® foil with a heat-activated adhesive (CMC 61325; also available with an PSA adhesive, CMC 61145). Foil and adhesive are hydrolysis-stable and can therefore be used permanently in fuel cells. The adhesive used allows a very narrow lamination surface of the retaining foil on the functional membrane.

The adhesive is not sticky at room temperature. This facilitates processing in the subsequent processing steps (e.g. pick and place). Even a subsequent correction of the position is possible. 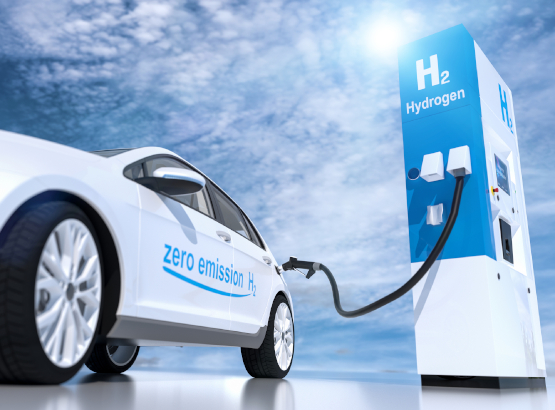 However, in order to achieve particularly high cycle rates, the heating step for melting the adhesive can be troublesome. For this reason, CMC Klebetechnik also offers a version that sticks at room temperature (CMC 61145). In this case, the foil coated with the catalyst layer can be connected to the subgasket foil by simple "placement". No heating is necessary, especially heating that could reach the load limits of the CCM.

Investigations have shown that the acrylic adhesive used by CMC Klebetechnik still increases slightly in its adhesive strength even under the typical cell loads (temperature and hydrolysis).

Due to the considerable pressure load within fuel cell stacks, mechanical deformation of the subgasket foil can occur, depending on the geometries of the seals and bipolar plates used. Therefore it is always possible to use thicker foils (50µm, 75µm - depending on availability). Kapton® foils are a possible alternative, especially due to their high stiffness even at increased temperatures.

Customer-specific changes - in the simplest case modifications of the material thicknesses - are possible in a joint development, as are adhesive systems adapted to special requirements (e.g. adhesion to repellent surfaces, SPEEK, Nafion® from DuPont, Caltec® from BASF, for alkaline fuel cells (AFC) or phosphoric acid fuel cells (PAFC) and other special forms).

In addition to adhesive foils for the production of the frame foil (sub-gasket), there is also the possibility of bonding moistening fleeces in a sealing manner. These fleeces improve the service life and efficiency of larger fuel cells by actively influencing the moisture content of the PEM membrane. Air humidification is an important component of many PEM fuel cells for optimum membrane humidification. Durable and reliable sealing and bonding are typical tasks for acrylic adhesive tapes.

Products for use in fuel cells

For methanol direct fuel cells (DMFC, HT-PEM) with operating temperatures significantly above 100°C, for example, using Kapton® FN is a good choice. This special variant of Kapton® has a very good hydrolysis stability and shows almost no shrinkage. For this reason, frame foils made of Kapton® FN are stress-free even at temperatures at which PEN foils usually show shrinkage of approx. 0.2-0.8%. Special, permanently elastic adhesive coatings (PSA) act as assembly aids and above all as sealing elements (e.g. methanol reformers).

Kapton® FN also shows a lower coefficient of thermal expansion of only 20 ppm/K compared to polymer foils made of PEEK (45 ppm/K) and PPS (51 ppm/K). Kapton® FN is thus much closer to that of steel (11.7 ppm/K) and thus avoids stresses within the stack.

An even further improved version of the Kapton® foil is Kapton® 200FWR919, a hydrolysis-resistant Kapton foil that is also coated on both sides with a fluoropolymer layer to achieve very good chemical, thermal and electrical resistance. Kapton® FWR has a further improved hydrolysis stability and is more pressure resistant.

Another very good application is DuPont™ Oasis® 200TRT515, a further development for the aerospace industry with excellent hydrolysis stability and chemical resistance and neutrality.

In addition, PVF, PVDF and PPS foils can also be used, each of which has specific benefits (low water absorption, low permeation rates for hydrogen, high hydrolysis resistance).

Fuel cells for non-continuous operation such as emergency power generators for measuring stations, radio systems, IT equipment, decentralised power supply for electrical consumers or charging operation for electric batteries benefit from the much simpler handling of the "fuels" for "methanol" high-temperature fuel cells (keyword CO and sulphur poisoning). 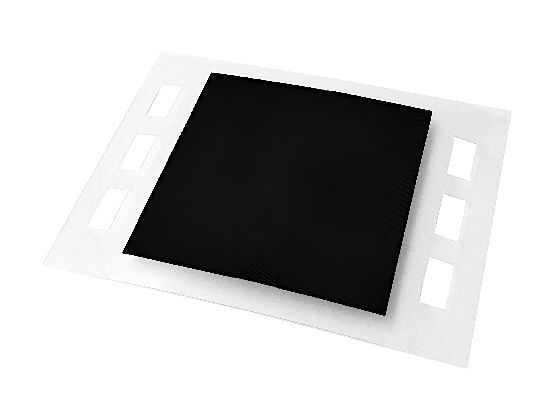 PEM electrolyzers for Power-to-Liquid (P2L) and Power-to-Chemicals (P2C) or Power-to-Gas (P2G) can also be equipped with these foils. Due to the fundamentally reversed process of the fuel cell, considerable CO2 emissions can be avoided when using regenerative energy.

Also for applications as MEA for electrolysers, the chemistry and mechanical structure of the adhesive foil for the functional membrane can be adapted to the customer's requirements.

As with any conversion process, waste heat is also generated during "cold combustion" in the fuel cell. This must be discharged to prevent overheating. One of the heat management techniques is to connect the fuel cell to the coolant circuit of a hybrid vehicle. Alternatively, a separate coolant circuit with heat exchanger and fan can be used.

The thermal connection of elements of the heat path requires in many cases a mediating layer. Dimensional tolerances, warping and differences in thermal expansion can lead to air gaps that considerably impede heat transfer.

Heat exchangers, air coolers, condensers, cooling plates or heating elements for preheating cryogenic NT-PEM stacks can be thermally bonded with heat conductive silicone foils from CMC Klebetechnik. The flexible, elastic foils are highly thermally conductive and compensate for manufacturing tolerances and other unevenness. Due to the 100% wetting of the surfaces, the maximum possible cross-sectional area is available to the heat flow. The products can be used at continuous temperatures of up to 200°C.

It is still a dream of the future that regenerative energy could also be massively used in road traffic. As with lithium-ion battery-powered fully electric or hybrid vehicles, a satisfactory infrastructure is still not in place at present. Isolated solutions have been in place for well over a decade. City buses have been running on hydrogen propulsion for a considerable time. This hydrogen can also be used for fuel cells. But there are still not enough filling stations for H2.

Nevertheless, the fuel cell has decisive advantages for range extender vehicles (hybridisation). Unlike current solutions, drive technologies from two worlds are not required (combustion engine and electric drive). The relatively simple system of a fuel cell, which in continuous operation simply recharges the battery permanently, significantly simplifies the design of hybrid vehicles. For heavy vehicles and vehicles with a long range, the fuel cell will even be able to be used as the main drive in the future.

But there is still a lack of market drivers such as TESLA, which has an extensive network of charging stations, forcing the often much larger co-suppliers to follow suit. Nevertheless, many experts predict that fuel cell technology will finally find its way into the mainstream in the next decade.

Sealing foils for subgasket assembly in FC and RFB stacks

Adapted to the respective technology, manufacturers use very different materials for this separation layer, whose main task is to separate the two electrolytes that give off or take up electrons. In addition to chemical resistance, ion conductivity is therefore an important criterion. In addition, there are tasks that are more likely to serve safety purposes, for example: Highly temperature-resistant separators in lithium-ion batteries prevent metal fires even with faulty operation. In the stacks of fuel cells, the membrane foil in the form of a frame not only serves as an assembly aid, but also enables cost-effective production in a roll-to-roll process (or immediately roll-to-punch). In the stack of the redox-flow battery, it makes a significant contribution to keeping the two electrolytes safely separated. It chemically seals the two half-cells and thus prevents direct mixing.

For fuel cells and redox-flow batteries, CMC Klebetechnik offers products that allow a combination with the actual ion exchange membrane. Depending on the operating temperature (NT-PEMFC, HT-FC), process-typical media (e.g. vanadium-based, methanol, water) or mounting method (gluing, heat-sealing), different foils can be offered. Even membrane foils that are difficult to bond, such as Nafion® from DuPont, can thus be clamped in a frame that functions as a seal on the one hand and also allows the active area to be fixed mechanically (subgasket frame).